SLi (SuperLight) Men's Triathlon Suit. Over 50% lighter, utilizing the all new water resistant SLi fabric.  Minimalist design for maximum speed and minimum drag, both in and out of the water.

Be the first to ask a question about this.

The Lifesport logo did not transfer well, as it is blotchy at the beginning, and more solid at the end.
I will need a size medium, as the small is too tight. I am sending the suit back to you today.

The running shorts are awesome.

When I bought the SLi Tri Suit I intentionally chose a size smaller than usual because I wanted a super tight sitting suit, especially for the swim in short course races where I didn’t want to use a swimskin. So, first time I wore it was last weekend during a Triathlon race and I have to say, although it’s a size smaller it suits perfectly. It’s not too tight and my swim was the fastest ever (PR)!
On the bike I noticed the comfortable padding, which is not too thick but big enough to cover those areas where you need some padding if you are riding a split nose saddle like the Adamo ISM. (I know what I am talking about because I used a different trisuit before and had terrible shavings).
Also during the run the suit felt great to wear. One thing I noticed when the really heavy breathing started - the suit felt to be a bit tight around the chest giving me a kind of feeling of being laced in (, which is obviously because I got a size smaller ... ) Anyway, I opened the rear zipper and realized immediately the feeling disappeared and I felt great again.
Overall, I am super happy with the suit and result - Overall winner, just PERFECT!
My conclusion, if you want a super tight sitting short course SLi Tri Suit consider getting a size smaller. For me it worked well. 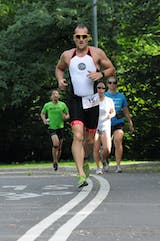 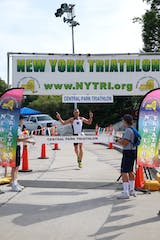 A
A.S.
a suit that makes fast

Love the equipment. It's very comfortable to wear and and it makes super fast (Pics from my overall win at the New York Lake Welsh Triathlon 2018) 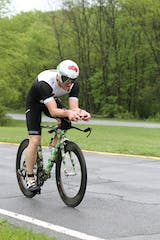 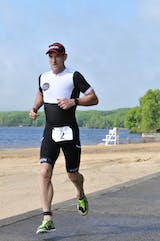 Andreas, Thanks for the review and congrats on not only looking good on the race course but winning as well.